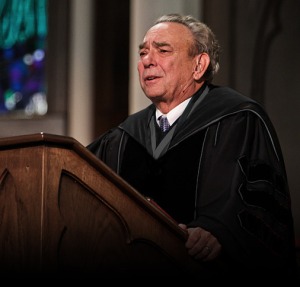 The pastor, author, and founder of Ligonier Ministries, R.C. Sproul, died on December 14, 2017. And Stars Wars Episode VIII: The Last Jedi opened in theaters the next day.

As is true for so many pastors, Sproul’s ministry was significant for my own Christian discipleship, calling to ministry, and theological convictions. To this day, reading Sproul’s purple-blue paperback Chosen by God is one of the most formative events of my life. His clarity of teaching combined with his uncompromising stand on theological truths like biblical inerrancy, justification by faith alone, and the holiness of God have been used by God to solidify the ministries of bible-believing Protestants of all types – reformed and non-reformed alike. He was a giant.

Last night my wife Amy and I saw The Last Jedi, and as I drove home after the movie I couldn’t help but reflect on Sproul’s legacy. Now, don’t worry. This isn’t a campy Sproul-Star Wars memoriam. R.C. Sproul wasn’t the last Jedi. And he wasn’t Yoda either. Sproul’s legacy didn’t depend on him being an Obi-Wan Kenobi who was our only hope. R.C. Sproul knew he wasn’t our only hope. In fact, he spent his entire ministry pointing us away from himself and toward another hope. In a world of endless distractions, Sproul in life and death rightly readjusts our focus.

So, here’s what gripped my mind as I left the theater last night.  I caught myself having this thought: We’ve got to wait until 2019 to see how the story ends. Seriously, it wasn’t even five minutes after the movie had ended, and I’d already moved on and started thinking about the next release date.

We are all too often tempted to entertain ourselves to death through starving our souls by binging on shallow-expectations. There’s always another trailer to watch. There’s always another release date to put on our calendar. There are already pages upon pages of blog posts listing the most anticipated movies of 2018. And next December there will be another list of the most anticipated movies of 2019; the follow-up to The Last Jedi will probably make that list.

And I’ll probably watch it, but I really need something bigger to live for and long for. We were created to crave something far more filling. We were designed with desires more ravenous than a two-hour fantasy two years away can ever fulfill. Our hearts cannot bear the heavy burden of being anchored to the lightweight wisps of something utterly and eternally meaningless. They must be moored to truths and realities that are infinitely more important and subsequently infinitely more satisfying.

And that’s why I’m so very thankful again for the ministry, message, and example of R.C. Sproul. The Washington Post, in its obituary for Sproul, described him as, “outside the mainstream of popular American life.” That’s both an understatement and one of the highest compliments that anyone could receive. In a world glutted on a mirage of satisfaction, Sproul was truly satisfied.

He was satisfied because his focus was determinedly distant. He shared the desires of those of whom the world is not worthy, whose greatest desires lie not in this earthly realm but in the presence of the God he loved. The world might live paycheck to paycheck or movie premiere to movie premiere, but Sproul would settle for nothing less than the soul-satisfying glory of the holy God who justifies sinners by his grace alone through faith alone in Jesus Christ alone.

R.C. Sproul had, and still has, an elevated vision. He lived, and died…and lives for that which is eternal, and in dying that kind of death, he continued (as he still does) to be our teacher – inviting us to follow him as he followed Christ, to give our whole selves, mind, body, and hearts, to the God who speaks in the very words of the Bible.

This Baptist has learned a lot from R.C. Sproul, and I suspect I’ll continue to learn from him. He makes me want to live out the words of the final stanza of John Piper’s poem, The Calvinist:

Listen to his breath,

Through the ebbing pain:

I want to live for something longer lasting than a weekend in December of 2019. I don’t want to live in a galaxy far, far away. Like R.C. Sproul, I want to leave the mainstream behind, and live in the galaxy of the gospel.

Cade Campbell (M.Div, Southern Baptist Theological Seminary) is Pastor for Preaching and Discipleship at First Baptist Church Henryville, Indiana. He and his wife Amy are originally from Mississippi. You can follow him on Twitter at @DCadeCampbell.